Visiting the city of volatile weather with 16 sweet-sixteens is intense and hurts in the feet. We’re an art-oriented group with an ambitious program to travel blog London and see at least some of the important works available here from the Middle Ages to Modernism. Museums are not enough when in London, though. Girls wanna shop, too.

Art depicting the daily, domestic, and decorative is always an inspiration as are “modern” ideas occurring before their time. It was a great revelation to see the Portrait of Giovanni Arnolfini and his Wife by Jan van Eyck from as early as 1434 in the National Gallery. Art from that time mainly deals with pompous religious topics, but here is a picture of a seemingly middle-class, ordinary couple in their home with their homely decorations and the family dog, the wife possibly pregnant at the time of the wedding. Was that appropriate in 1434? Look at the platform shoes on the floor. Aren’t they the design influence of what we see on the catwalks today? 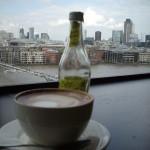 Coffee and view from 7th floor at Tate

Moving on to Tate Modern, another favorite has been Richard Long’s Small White Pebble Circles from 1987 that obviously touches the interior design trends of today, 25 years later. In addition to intriguing pieces of art, the museum bookshop is full of good stuff, such as interior design book New London Style and a card version of the Tate Artist Timeline, a piece of wall art that is a great way to grasp what is what and who is who in modern art. 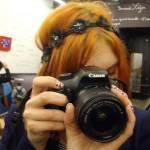 Being an all-girls group on the move and in context with the close relation of art and everyday life, I’ve paid attention to women’s role in the works we’ve seen. They say that less than 3% of the artists featured in the museums are women whereas 83% of all nude models are female. Could this group of artistic girls maybe change the numbers some day soon? More about the girls and their 3-year effort to make this trip is available in Finnish on the 4 Days in London travel blog.