On top of the nation’s bookcase

I visited the high-and-mighty Finnish Literature Society (SKS) for the first time to witness the annual translation awards ceremony. The Finnish Association of Translators and Interpreters (SKTL) grants two awards for translations into Finnish: the Mikael Agricola Award in recognition of an outstanding literature translation and the J.A. Hollo Award for a non-fiction translation of exceptionally high quality.

Translation being a pink-collar profession, at least in Finland, the 2012 event was predominantly a triumph for the ladies. Kaisu Lahikainen was awarded for her Estonian-to-Finnish translation of Ene Mihkelson’s Katkuhaud (Ruttohauta, Plague Grave). Kristiina Repo received the non-fiction award for her Russian-to-Finnish translation of parts 1 and 2 of Konstantin Stanislavski’s Rabota aktera nad soboj (Näyttelijän työ, An Actor Prepares, An Actor’s Work). 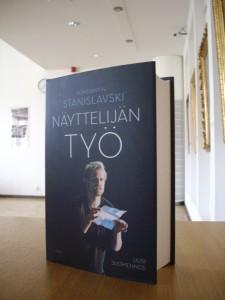 In her speech, Repo lamented the confusions and misunderstandings involved with the early translations of Stanislavski’s works both in Finnish and in other languages. Method acting has nevertheless become a popular technique that is still, nearly a hundred years after Stanislavski’s time, very much in use all over the world. The Finnish edition of the works shows Repo’s careful and insightful command of the Finnish language as well as her expertise for developing the Finnish theater terminology, said the jury.

The amount of literature translated into Finnish is increasing, said chairwoman of SKTL Kristiina Antinjuntti in her opening speech to the ceremony. Awarding translators is not, by any means, a way to take credit from the original authors. Yet a translator’s role cannot be ignored or belittled. The better the translation, the more credit for the author, and the better opportunities for the book to become accepted and appreciated in the target culture.

On top of the nation’s bookcase is a translation of a Finnish saying Kansakunnan kaapin päällä made known by Finnish author and journalist Matti Kurjensaari.